We have all sat down at home in front of the TV, watching a film where it all kicked of with a massive food fight whilst there’s nothing but laughter in the air and wished we were there getting stuck in. Now imagine that scenario but with paint, in the Queen Elizabeth Olympic Park, surrounded by a number of people in full on festival mode all brought together by music. An explosion of coloured powder paint thrown up into the air every hour on the hour by the thousands of descendants expected upon the Olympic Park over 2 days for the last weekend in June, with the saturday already sold out. Holi Festival of Colours is like a childhood dream come true.

Very few if not none will disagree that visuals can heavily influence a persons thoughts on a party, so unless everybody all decides to throw only white paint in the air, Holi Festival Of Colours is sorted. It has a concept that gets the crowd involved and has all the hard work done for them which allows for some superb photo’s and no doubt unforgettable memories. Since the first Holi Festival of Colours in 2012 which sold out in 4 minutes and had 3500 guests, founders Max Riedel, Maxim Derenko and Jasper Hellman were right in thinking big, as within 2 years the the festival is now on a world tour with festivals planned in around 30 major cities throughout 2014. The concept is derived from a long standing Indian tradition where every year Gulal (a coloured powder) and loud music intoxicate the people as a way of welcoming in the spring, living the spirit of the indian festival. This combination of music, colours and a festival atmosphere helps the festival to sell itself and you can be sure there have been people who have bought tickets on the strength of the videos on youtube alone. 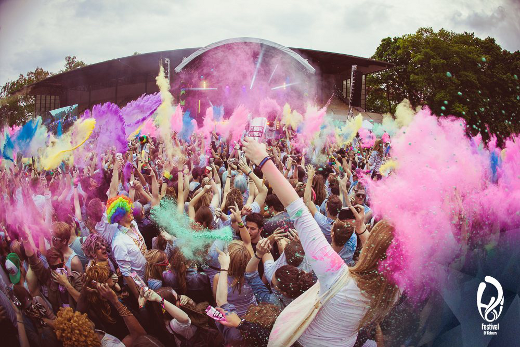 With the main emphasis not being based solely on the musical line up but more on what can be done to enhance the atmosphere this helps set Holi Festival of Colours apart from other festivals. Its hard to disagree with the notion that it helps enhance ones experience.The use of big headline acts is always going to guarantee huge numbers and draw out an expectancy in regards to quality of music. Instead, by sticking with a formula which incorporates the celebration of the indian festival and culture mixed with european customs its no surprise another date has been added for Sunday 29th June, welcoming back acts like Bombay Boogie Soundsystem already confirmed for the Saturday. Aside from House & Techno Music, this years Holi Festival of Colours will feature other musical genres such as Hip-Hop provided by acts like DJ Eskie 83 which helps appeal to a wire audience rather than a crowd all seeking a fix of what the underground scene has to deliver.

Whether in London, Berlin or Amsterdam – the sequence of events is always the same. The party is from 12 noon to 10 pm and from 3 pm there is a spectacular countdown every hour. Everyone throws their coloured powder in the air turning thousands into a sea of bright colours falling in line with the motto: BE HAPPY. The Holi Festival of Colours takes place in the Queen Elizabeth Olympic Park across the weekend of the 28th & 29th June 2014 with tickets for the 28th sold out there are still tickets available on sale for Sunday 29th of June via the Holi Festival of Colours website.