Little be known to many on the shores of the UK, Romanian based Larisse Van Doorn has knack for finding her own groove. Since debuting with her 1st EP in 2011, joining the likes of Hector Couto and Horatio by releasing on Quanticman Records, Larisse has steadily earned her stripes and with the same label drops her latest record. The Natural Rhythm artists new 4 track EP entitled ‘Mother Nature’, delivers two smooth but very different rhythms with two further remixes of the title track by Dejvid and Takuya Yamashita. 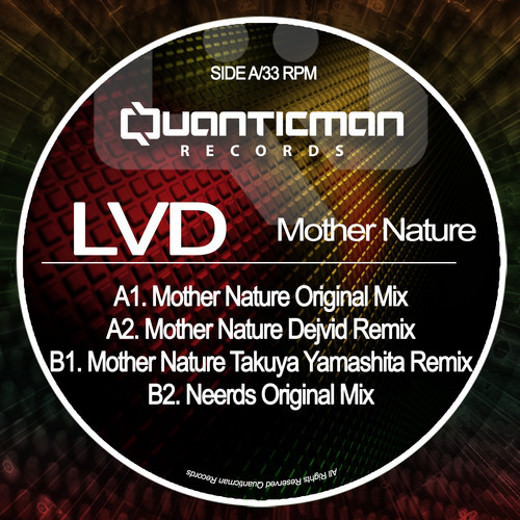 Mother Nature. From the off it screams with hard piercing kick drums and rolling snares with added effects, only dampened by the melodious chords. The dark dubby feeling from the drums and bass have a continual rhythm which allow you to take yourself on a journey. The subtle change of notes played by the piano are just enough of what is needed to add some body to this minimalist feeling track. An Infusion of effects, percussion instruments and change in kicks help break down the track, preventing it from becoming monotonous.

Mother Nature (takuya yamashita remix). The soft harmonic notes used to create the intro set a soft relaxed ambience to the remix which is amplified once the tune really begins. Once in full swing this track really begins to groove. Throughout Takuya Yamashita uses warm keys and bass’s which creates a vibe where you feel every change. A flute solo which begins around 4 minutes in during the break down, is almost enchanting as it takes its own lead. A smooth bass and a stronger melody adds more body to this remixing giving off a summery feel.

Mother Nature (dejvid remix). Of the 3 Mother Nature track’s, Dejvid’s interpretation is a lot more stripped back and minimal in comparison. The harmonic keys used to form the melody sit on top of a smooth pumping b-line. The drums are piercing as they help create they create the rhythm, only disappearing when a soft vocal sample is used but its the sub-bass that you ride on. The mood and groove of the bass make it an easy dance floor mover especially during the break down before the second drop.

Neerds (original mix). There are many layers to this track and as its played you can look around the room noticing everybody is to dancing to a different sound. An orchestral piano and a rolling pattern of kicks, hats & snares. Two contrasting sounds which sit together on top of a low dubby b-line accompanied by percussion and effects. The intro is slow and Neerds takes a while before the bass’ becomes fuller and stronger but from then on it maintains the same flow throughout.