Reviews | Elrow vs Elrow: The Tale of 2 | Cessle Innit

Within the space of 2 years Elrow have smashed it. It’s almost as if they read the rule book, re-wrote in Español before translating into english for the whole world to look upon flabbergasted with envy. If for some reason you haven’t yet heard about this spectacular event, where have you been? Hidden beneath a rock somewhere remote? The weekend beginning 10th March saw the Elrow crew descend upon the city of London, offering up 4 shows across 3 days. Two night events and two day parties. Our focus draws to the two daytime events, the Saturday show at Tobacco Docks and the closing Sunday show at Village Underground, the same venue where the 2 late night showcases were held. It’s hard to compare the 2 events, both were totally amazing within their own rights, but it is due to the locations which make them almost incomparable. Elrow @ Tobacco Docks aka Elrow the experience & Elrow at Village Underground aka Elrow the rave. How do you compare the 2? The answer is simple, you don’t. You just have to accept the two parties for what they are and embrace the fun filled spectacular being thrown at you and I literally mean being thrown at you from the stage before you. 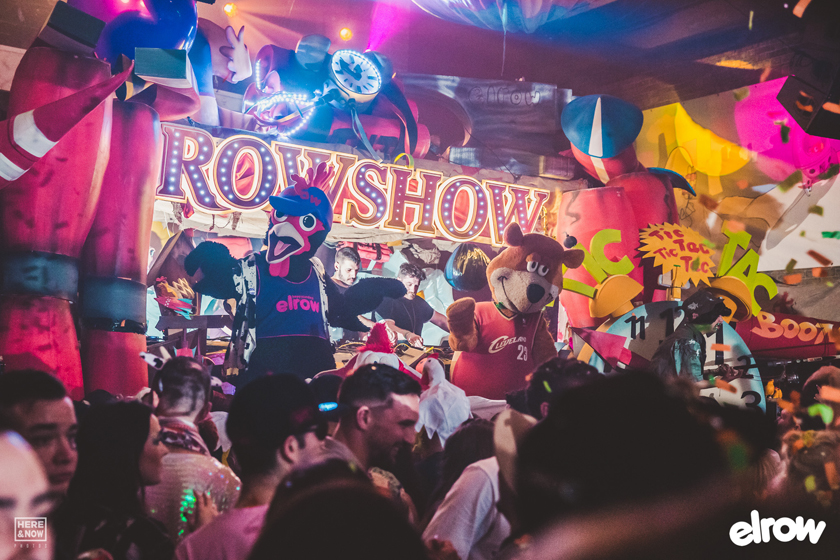 If there was a negative, and believe me that it’s a big “IF”, it would be the lack of outdoor raving space. In my personal opinion this was not an issue. I believe it only added to what was a great weekend, plus who really wants to party outdoors in cold London city during the month of March? Turning up to TD, eagerly anticipating getting inside from the cold, negotiating your way past a highly professional, relaxed and on point security team only to find yourself lost in music and spoilt for choice as to who to listen to. That is pure bliss. Paco Osuna up in the Little Gallery churning out an incredible 5½ hour set. Robert James b2b De La Swing and Patrick Topping b2b Andres Campo down in the incredible underground Car Park or Tech House faves Jacky, Richy Ahmed & Eats Everything in the Big Gallery. Totally spoilt for choice and this truly felt like the first festival of the year, just indoors. Ravers were funnelled into Tobacco Dock’s 5000 capacity venue with ease and left to revel in what was on offer, finding a room to tailor their musical needs whilst navigating their way through the untold amounts of hidden secrets and well played actors on show.

As the Sunday came upon us everything seemed soo much more relaxed and less intense, just how a Sunday should be. With Village Underground being a venue well schooled in the art of Sunday daytime raving it was a given that things would go off without a glitch. The 800 capacity venue played host to a line up that enthralled ravers from start to end. Ravers were delighted by performances from Paco Osuna, Marc Maya b2b Gonçalo and a set from Eats Everything b2b Andres Campo where the 2 DJs created a truly memorable moment where they dropped a remix of Blaze’s old school classic Lovelee Day which caused the ram packed venue to erupt and sing along in unison as if they were instructed to do so beforehand. I was fortunate enough to find myself backstage and got a glimpse into the real hard work that takes place behind the scenes that makes this party so truly special. You could easily be mistaken for thinking that the costume clad individuals were just paid to run about aimlessly and entertain. This is not the case. The actors and actresses are given clear instructions and they never falter from their roles, staying in character helping to bring the whole event to life. The fun carried on from 2pm right through to 2300 with the event coming to a close with an authentic flamenco track signalling the end of this Anglo-Catalonian affair.

Next up for the Elrow team in London is their biggest Elrow event to date where they take full control of London’s Olympic park and no doubt tickets will sell out super fast. We look forward to what instore for London this October when Elrow come to town.