This week’s ‘Trainer of the Week’ is the Adidas ‘Fall Of The Wall’ ZX 8000 Charlie in Neo White, that drops as part of the highly anticipated ‘Fall of the Wall’ Pack alongside the ZX 8000 Bravo in Bliss Pink and the ZX 8000 Alpha in Black. This year marks the 25th anniversary of the fall of the Berlin Wall. German sportswear giant adidas tribute the anniversary of one of the most historic events of the 20th century by reissuing one of it’s all time, most popular running silhouettes that coincidentally first released twenty-five years ago.

The pack could be criticised for trivialising one of the most monumental moments in the last century, however regardless of opinion or moral stand-point adidas approached the release respectfully by manufacturing the pack in domestically in Germany; in the last remaining trainer factory in the country, arguably giving them more legitimacy than other sportswear conglomerates in releasing the ‘Fall of the Wall’ Pack. 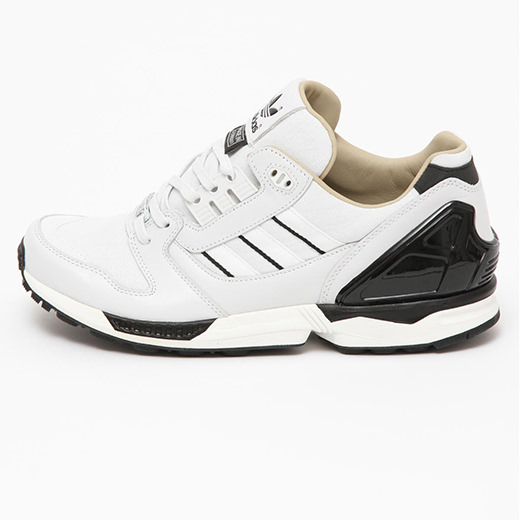 The ZX 8000 appears in three new colour-ways for Holiday 2014; taking inspiration for each palette from the graffiti covered walls that divided Berlin.  The Black, Neo White and Bliss Pink renditions of the iconic 1980s runner have been coined the ‘Alpha’, ‘Bravo’ and ‘Charlie’ referring to the border crossing American allied checkpoints between West and East Berlin.

The Adidas ‘Fall Of The Wall’ ZX 8000 Charlie in Neo White draws inspiration from America’s most iconic checkpoint along the wall, the crisp white palette represents the white signage and buildings which characterised this cold war symbolic location.  The upper is crafted from breathable mesh, soft leather overlays, and features 1:1 tooling including: a textile three stripe overlays, as well as limited detailing such as ‘Made in Germany’ branding at the tongue and a commemorative ‘Charlie’ lace jewel. The moulded heel cage accents the arrangement, decked out in black, with a white Torsion midsole and black rubber outsole tying the monochrome colour-up. 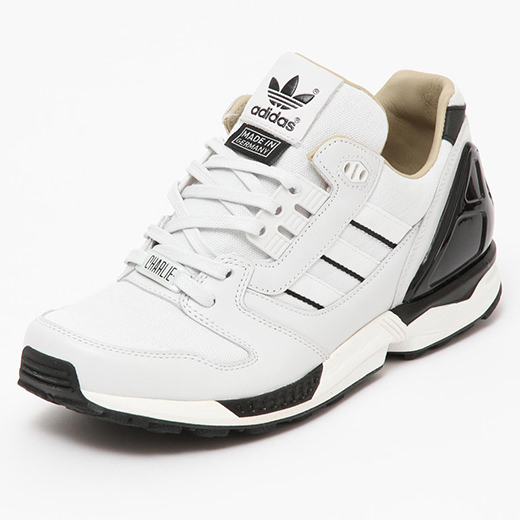 This highly exclusive drop is limited to 800 of each rendition of the ZX 8000.  All three ‘Fall of the Wall’ iterations of the ZX 8000 retail at £144.95 and are available while stocks last.  Head over to Wellgosh to purchase your pair to avoid disappointment.