BCHP brings global house music superstar RALF GUM to London for an exclusive 3 hour set of soulful, deep and afro house grooves. Carrying on our theme of showcasing the biggest names in house music to intimate underground venues we present this event in a fantastic new venue The Shelter. Accompanied on the night by BCHP residents Nick Jones and Jonathan George this will be a night of pure soulful, deep, jazzy afro house. To enter the competition simply fill in the form below and we’ll let you know if you’ve won. For guaranteed entry get your tickets HERE. 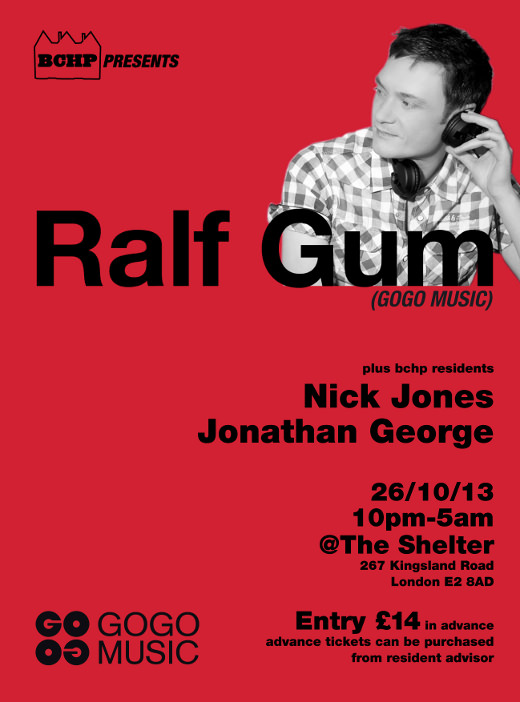 Q) Ralf, how are you, we don’t see you often in London, are you looking forward to the party?
I am very well and am excited to come and play. Every time I came to London I have a good time and I have heard great things about the party itself. I do like smaller venues a lot, as they suit my style of playing and allow the DJ to connect to the crowd. As well I was told that the Shelter has an amazing sound-system, which is key for a good house experience. I am looking forward a lot to it.

Q) You moved to South Africa in 2012. We know house music is massive there right now how is it working out for you?
It worked out very well. The House scene the biggest and in my opinion as well the best worldwide, but I would not have made the move because of only that. My wife and I liked the beautiful country, enjoyed the better weather and the friendly people, too. As well we found good friends in the country. All those reasons together made us take the decision to relocate. And we haven’t looked back since then, as we are happy in our private life and the professional side worked out for me fairly well, too. My album ‘Never Leaves You’ was Gold Awarded end of 2012, ‘Take Me To My Love’ made it to #1 of the official charts in SA in December 2012 and I have plenty of really good DJ-gigs.

Q) Has being based there influenced your productions and DJ style?
Not really. I rather would say I am finally able to play the music I always felt and wanted to play, but have not been able to play on every gig in Germany or other countries, which is real soulful and deep music, without any compromises.

Q) You had amazing success with your album Never Leaves You last year, do you think house music globally is on the up?
I believe the ups and downs of specific genres and sub-genres works in circles. While the deep and soulful music became very niche in a lot of countries in the last years, people seem to get hungrier for it again slowly. Thus I hope that we see a bigger following for it again soon. Important for a strong come back of the music will be good songs, as a good song can reach a wider audience thru radio or TV music channels. This means the people who produce soulful house need to deliver quality productions and songs, plus need to understand the importance of an all-encompassing promotion for it, which includes a radio edit and at best as well a video.

Q) You worked with some amazing talent on that album,  what was your favourite collaboration?
I could not be happier about the collection of vocalists I was able to include on the album, as I consider them to be beyond the best in House Music. It was a real pleasure to work with each and every one and it is hard to pick a real favourite. Every person obviously has his/her own personality which influences the way of working. Some of them, like Kafele, Monique Bingham, Jocelyn Mathieu are not only collaborators, but friends of me by now, so it is even a greater pleasure (and easier) to work with them.

Q) Which other DJs and producers are really doing it for you at the moment?
There are many, which I think is a positive thing. Of course those in the game since many many years, like e.g. Louie Vega, Spinna, Atjazz, Glenn Underground internationally or a DJ Christos and Vinny Da Vinci in South Africa are still doing it big time, but there’s lately coming up a whole new talented generation of young DJs and producers in South Africa who are doing great and tasteful work. To name a few, I suggest being on the look out for people like Sir LSG, Trancemicsoul, Chymamusique, Jullian Gomes.

Q) Finally Ralf, what should people expect if they come down to check out your set at The Shelter on October 26th?
Well, I already said it above, I like it deep and soulful and that’s what I will play. I guess I will have some tracks from the motherland which haven’t been played in London yet. As I never plan my sets, but play accordingly to what I feel on the night, people should come with a good mood and an open ear. 😉
All you have to do to enter is fill in the form the below. All applicants must be over 18 and the winner will be announced on Thursday 24th October and will be notified via email. Only one entry per email will be allowed. By entering your details you are agreeing to be added to the Concrete PR newsletter mailer, if you wish to unsubscribe at any time please follow the link at the bottom of the page on the newsletter. Good luck.