This week’s ‘Trainer of the Week’ is the one-on-one release of the Adidas Hamburg Vienna in Chalk/Red/Gum.  Swiftly followed by the release of the Dublin and Oslo 2014 iterations of the Hamburg also available for Summer 2014. The iconic Adidas Originals silhouette was originally released as part of the now legendary 1982 ‘City Series’.  The indoor football icon reappeared on the shelves earlier this year after over three decades in the Adidas Originals vaults.  The Hamburg was adopted by football casuals, revered across the terraces as the one of the most street-ready silhouettes on the market throughout the 1980’s. The inspiration for the reissue of the pivotal street-adopted silhouette dates back to 1975.  Both the ROM and Hamburg were amongst the more easily accessible first offerings from Adidas, remaining on the market years after the initial releases of both the classically styled trainers.  The Vienna rendition of the Hamburg appears how it originally dropped in the UK; in it’s chalky suede build, as the style was subtly redesigned for various European countries, including: France, West Germany and Yugoslavia. 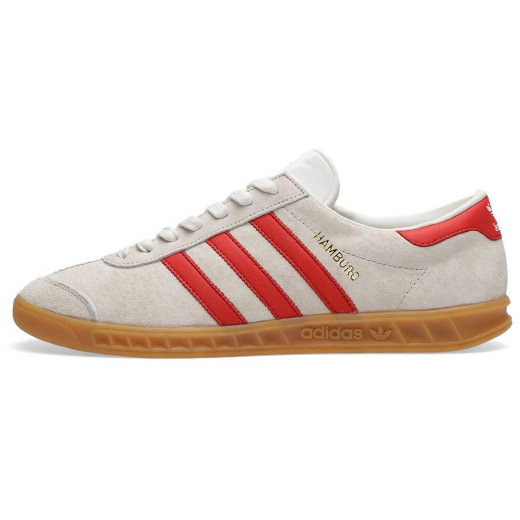 Adidas present the terrace classic in a luxury chalk pig skin suede upper, accented with red patent leather three stripe branding appearing on the sidewalls, and a Trefoil branded red patent heel tab.  The foil gold ‘HAMBURG’ lettering appearing next to the three stripes on the sidewall, maintains the aesthetic of the original Hamburg iterations.  The upper also features tonal branding on the synthetic tongue, tonal laces and tying the clean, minimal upper is an off-white synthetic leather lining.  Underfoot is the classically styled Adidas Hamburg sole unit, appearing in its original translucent gum construction, complete with branding appearing tonally on the midsole.

Leave a reply Click here to cancel the reply